Sign up to receive the best discounts and product news today! 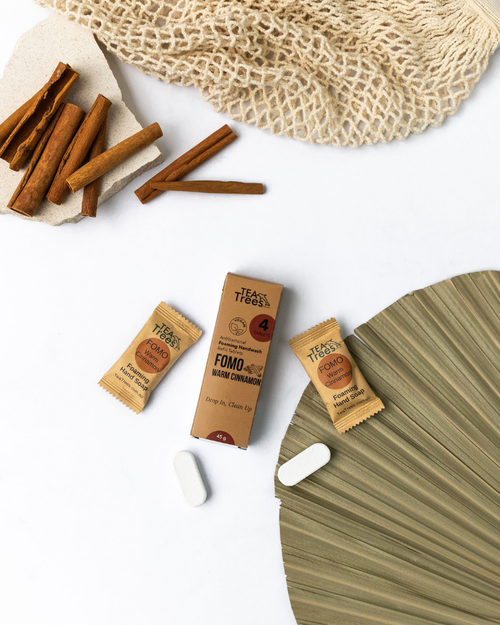 That's under $4.25 for each 450ml refill including FREE POSTAGE

A warm cinnamon foaming soap with tantalizing peppery, fruity and vanilla like fragrances that will make you feel warm and cozy.

Suffering from FOMO?  Well you should be!  You do not want have ‘fear of missing out’ with our revolutionary Foaming Handwash Pack.  Goodbye to grubby, smelly, grotty and downright sickly hands and hellooooo to Fomo dissolvable Warm Cinnamon handwash tablets.  In this pack you will receive 4 x dissolvable Warm Cinnamon antibacterial cleaning tablets.  Equivalent to buying 4 large plastic soap dispensers from the supermarket, you will immediately be using less plastic and will be making a real difference to our planet. Safe for your family and pets! Note - there is no Tea Tree Oil in our products.

It’s important to have a foaming handwash dispenser in order for the tablets to product a delightful fluffy cloud of bubbles – if in doubt, the Tea Trees Foaming Handwash bottle works a treat

Best of all, the FOMO Handwash system is an antibacterial handwash – it’s non toxic, gentle, feels delightfully soft (like a cloud of goodness) and smells divine.  Other benefits of Fomo include:

We'll include FREE POSTAGE on any refill order so you can be comfortable knowing you'll be saving the earth AND your back pocket with zero additional costs.

What's in it?  We're all about transparancy so here's the breakdown of ingredients in simple terms.  No surprises at Tea Trees.

Sodium Carbonate: Often used as an antacid, it's also known as Soda-Ash and is nontoix in the levels found in Tea Tree products. It is also considered a substance friendly to the environment, as it occurs in nature in a dissociated form. In our hand wash teh Sodium Carbonate softens water helping other cleaning ingredients lift soil from hands.

Citric Acid Anhydrous: Citric Acid comes from citrus fruits.  The ‘anhydrous’ part refers to ‘no water’ – hence it’s in a tablet!  It’s used as a preservative, is non toxic and kills bacteria, mold and mildew.  It’s considered a gentle cleaner for those with sensitive skin and is biodegradable

Sodium N-lauroylsarcosinate: also known as Sarkosyl, is an anionic surfactant derived from Sarcosine used as a foaming and cleansing agent in shampoo, shaving foam, toothpaste, and foam wash products. A mild, biodegradable cleansing agent that is also a very good team-player next to other cleaning agents. It is known for its good foam-boosting abilities while improving the mildness of the formula. According to the FDA, Sodium N-Lauroyl Sarcosinate is completely safe if used as intended.

Sodium Lauroyl Glutamate: an amino acid surfactant sythesised by acylation and neautralisation of Lauric Acid and Glutamate from corn fermentation. It is natural, moisturising and mild. Besides its good surface properties, it will not irritate the skin and does not cause allergies and toxicity to the skin.

Sodium Benzoate: Often used as a preservative, it’s found in some soft drinks.  Benzoic acid is a good preservative and when combining it with Sodium Hydroxide it becomes more dissolvable (important when considering our tablets have to dissolve!) Some bacteria produce benzoic acid when fermenting yoghurt!  It’s biodegradable and non – toxic as a cleaning agent.